Kevin Keegan - A Case for the Defence?

Throughout his managerial career, Kevin Keegan was widely regarded to be a passionate, great man manager, and motivator but never good defensively. The lasting opinion of Keegan's teams is that they'd try and outscore the opposition, without much regard for defending. I thought I'd review that and see if King Kev has been a bit hard done by...... I'd love it if people took my defensive record seriously.....love it!

A slightly different feature this time, in the sense that it's not about a Big Game Player or Flat Track Bully, but instead looking to try and prove or disprove one of football's longstanding assumptions - much like Maradona being a one man team. This time it's the turn of everyone's favourite Geordie Kevin Keegan and his defensive skills.

From his appointment as Newcastle United Manager in February 1992, Keegan has overseen over 500 club games, winning over half of them. A great record, especially when looking a bit deeper. Most will point to the 12 point lead that he lost with Newcastle in the 95-96 season but that would be doing the man a disservice. Promotions with three different teams from the old First Division (twice) and Division Two, as well as finshing 3rd in the Premier League with a promoted team before pushing Man Utd to the last day of the season in 1995-96. In fact, his perfUormance as a manager is severely under rated, and more eloquently highlighted here. So surely with three promotions and several Premier League top half finishes, his defensive record can't be that bad?

So without further ado, a look at the statistics. The best way to measure defensive capability is surely clean sheets and goals conceded, so with that in mind, below are the relevant statistics for Keegan's teams in League Competition. 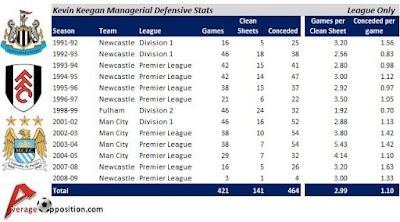 An overall record of a clean sheet every three league games certainly points to ﻿a good defensive performance. When you take into account that the 1991-92 season was with a team fighting relegation to the third tier of English football, and that the 1993-94 and 2002-03 seasons were as a promoted team in the Premier League, then the record is even more impressive. Unsurprisingly, the promtion campaigns saw the highest number of clean sheets with 18, 24 and 16 for Newcastle, Fulham and Man City respectively, but there were also double figures in four full Premier League seasons.

The 1995-96 season was his closest to winning the Premier League title, and was also his best defensively, with 13 clean sheets in 38 games. When looking at this season's Premier League, only Liverpool and Man City are on track to beat that. Current run away league leaders Man Utd are on course to finish with 10 clean sheets this league season (7 after 26 games). 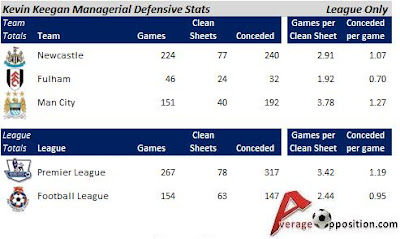 It's a similar story with the goals conceded. Of course with Fulham in Division Two he had his best record with 0.7 goals conceded per game. It should be pointed out that he had a bigger budget than most of the other clubs in the Division, but that's not always enough. Looking at his time with Newcastle, he had an overall recored of conceding 1.07 goals per game over 224 matches. A phenomenal record which gets even better if you look just at his first Premier League spell with Newcastle - 147 goals conceded in 143 games (1.03 goals per game). Looking at the all time Premier League Table, only 4 teams can better that - Man Utd, Arsenal, Chelsea and Liverpool.
﻿

So we've seen that Keegan's best Premier League season would be the third best in terms of Clean Sheets in this season's competition, and the goals conceded rate of 0.97 per game would be the second best based on current defensive stats at the moment. So how does he compare to his peers?

Well the first thing is to identify relevant Managers. The main one that jumps out is Harry Redknapp - another English manager that's managed in the lower leagues like Keegan, has won promotion to the Premier League and who also has several top 5 finishes in common with him. 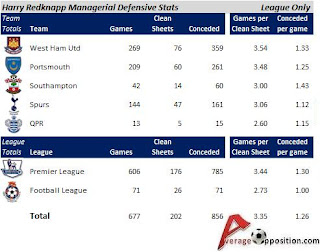 Redknapp has more clean sheets than Keegan with 202, but that was achieved over 677 league games, compared to Keegan's 141 in 421. Redknapp's rate of a clean sheet every 3.35 games is poorer than Keegan's and in fact, when looking at Redknapp's overall defensive record, he trails Keegan in each one - conceding on average 1.26 goals per game (to Keegan's 1.10). Keegan has a superior record in the Football League as well as the Premier League. Harry's most successful time was with Spurs where he kept a clean sheet every 3.06 games, and conceded an average of 1.12 per game - inferior to Keegan's time at Newcastle. A clear win for Keegan here.

Who else? Other managers that were around in Keegan's time include Dalglish, Souness, and Allardyce - all British managers, and all Newcastle manager at some point, but all without the tag of being defensively weak. Dalglish had a record of 0.93 goals conceded per game in Blackburn's title winning season, compared to 1.05 at Liverpool last season - more than Keegan's Premier record with Newcastle. Dalglish's one full season with Newcastle saw an average of 1.16 conceded per game. Souness conceded 1.35 goals per game at Newcastle whilst Sam Allardyce's short reign saw them conceded 1.57 goals per game - although his best season at Bolton saw just 1.08 conceded per game in 2005/06 as he led Bolton to 8th.
Improvement

One last quick measure would be to look at his impact on each team he's taken over, compared to his predecessor. Now it should be pointed out that if a new manager has been appointed, it's likely that the old manager wasn't doing particularly well, so I'll look at the successor's record as well. 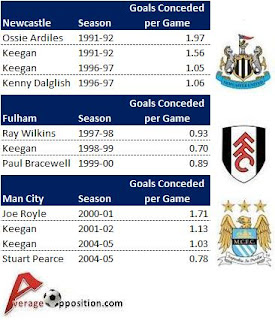 The only manager that has a better record was Stuart Pearce who took over for the last nine games of the 2004-05 season. Pearce followed that up with 1.26 conceded per game in his first full season. The Fulham stat is a little harsh on Paul Bracewell as Keegan had just got them promoted to Division One. I haven't included the last spell at Newcastle, but that ended in relegation, so it's fair to say they were better defensively under Keegan.

A clean sheet total of 141 and a record of one every three games would suggest that Keegan was not the defensively naive manager he's made out to be. Conceding less than a goal a game in four different seasons would also back this up. He compares favourably to his peers, and defensively, he improved every team he managed. There's no real debate - Keegan's defensive record is very good, it's just the perception of it that's poor.