Big Games, Lamela and other Fellas - The Premier League Returns

The Premier League is back! Not quite with the bang we were hoping, but with plenty of new signings and a set of Sunday Fixtures that may well live up to their 'Super' billing, that looks set to change. I'll have a look at a few of the new faces, and put my neck on the line to suggest where you should put your money on the latest Premier League odds this weekend......

New Signings
And it's with a few of those new signings that we'll start with. At the time of writing, it looks all but confirmed that Erik Lamela will be joining Spurs as a replacement for the Madrid bound Gareth Bale, and whilst there's no doubt that the Welshman will be a huge miss for the North London outfit, the fans should be in for a treat with the tricky Argentinian.

One of the main aims of this site is to attempt to track who are the big game players - by looking at the level of opposition that they score against. Whilst Bale scored a whopping 21 League goals for Spurs last season, to Lamela's 15, it is the incoming player that did it most against the Top 6 teams in the league. Despite Roma  finishing 6th, the 21 year old scored five times against Serie A's best to Bale's four in the Premier League. Three goals were scored against Udinese (5th) over the two games, and a brace against third place AC Milan saw the winger/number 10 thrive in high pressure games. And just outside the Top 6 in 7th place was Roma's fierce rivals, Lazio, whom also conceded to Lamela. Chuck in a brace of assists against 2nd placed Napoli and you have proof of a big game temperament indeed.

Another deeper lying player who joined a London club was Andre Schurrle who somewhat surprisingly started the game away at Man Utd. Whilst he's a good prospect at 22, looking at his scoring performances against the Top teams in the Bundesliga last season (Below is Top 5 as it's an 18 team league), he was quite unlikely to worry the Champions defence. 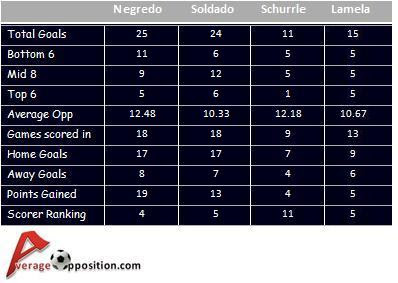 Two other big name signings to join the Premier League in the summer were Spanish duo Alvaro Negredo and Roberto Soldado. Both had excellent scoring records against the Top Teams in Spain. The new Man City striker Negrado scored 5 goals against the top teams despite Sevilla finishing in 9th, with 4 strikes against Valencia (in a 4-3 win) and a goal against Barcelona. Soldado went one better with 6 goals against the big teams, with Pellegrini's Malaga, Real Sociedad and Atletico Madrid the victims.

The Big Games
And so onto this weekend's games. Whilst league positions don't really mean an awful lot at this stage of the season, it's fair to say that Liverpool vs Man Utd and Arsenal vs Spurs are massive games - both derbies of sorts.

So who are the big game players that thrive in these games? Based on last season, Robin van Persie and Luis Suarez scored the most goals against the Top 6 with six strikes each. Unfortunately for Liverpool, the controversial Uruguayan isn't available for this match. But all is not lost. Daniel Sturridge is in great form with 4 goals in 3 appearances this season, and looking at his 2012-13 stats, he managed 3 goals against the Top 6 despite only signing for the Reds in January - with goals against former clubs Chelsea (h) and Man City (a) as well as this weekend's opponents (also away). With that kind of form, the 6-1 first goal scorer bet looks a decent price and if you're feeling brave, he's at 13-1 to score twice. For those of you that fancy the away team, then RvP is at 4-1 for first or last goal.

Elsewhere, Gerrard had three goals against the Top 6 last season, one in the corresponding fixture, as well as strikes against City and Spurs, whilst Rooney topped the charts against Top 6 teams in the 2011-12 with 7 goals.

In the North London derby, Theo Walcott had a decent knack of doing it in the big games. And last season was no different, with goals against United, Chelsea, Everton, Liverpool and Spurs. In fact it was only Man City in the Top 7 that kept him out. At 7-1 for first goal scorer the England winger could make it four seasons in row against Spurs.

For Spurs, if Lamela isn't available then there isn't a great deal of big game scorers to bet on. Last season, Adebayor only scored 5 league goals, but 3 were against the best teams. He's unlikely to play, as is Bale (4 goals) and their other big game scorer last season was Clint Dempsey (also 4 goals) who has since departed the Premier League. For an outside bet, Jan Vertonghen scored three times against Man Utd and Liverpool. He's available at 22-1 for first scorer or 15/2 at any time. If not, then it's Soldado at 7-1 that may be their best hope.